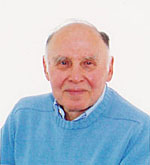 
"For theoretical and experimental contributions to the understanding of laser cooling and trapping of atoms and particles, for demonstrating the optical gradient forces on atoms and the trapping of atoms with light, and for inventing optical tweezers and showing how they can be used to measure the physical forces generated by biological molecular motors."


Arthur Ashkin was born on Sept. 2, 1922. He received an A.B. in Physics from Columbia College in 1947 and a PhD in Nuclear Physics from Cornell University in 1952. He worked at the Columbia Radiation Lab (1942-1945) while in the army, and at AT&T Bell Laboratories (1952-1991). At Bell Laboratories he did research on microwaves, nonlinear optics, and laser trapping. With colleagues he made the first observation of cw laser harmonic generation, cw parametric amplification, discovered the photorefractive effect and initiated the field of nonlinear optics in optical fibers. He discovered optical trapping of dielectric particles and proposed stable optical trapping of atoms. He made the first observation of optical gradient forces on atoms and the first observation of molasses and optical trapping of atoms. He was the first to trap biological particles with optical tweezers.