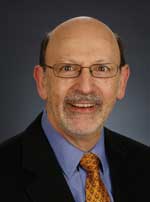 
"For discovery and characterization of organic-based magnets, and for observation and study of pedictable and previously unknown magnetic phenomena in these fascinating materials leading to fundamentally new science and the demonstrated potential for creative new technologies."


Born in Brooklyn, N.Y., Professor Arthur J. Epstein earned his B.S. in Physics from the Polytechnic Institute of Brooklyn in 1966 and M.S. and Ph.D. in 1967 and 1971 from University of Pennsylvania. Following being a Technical Staff Member at MITRE in 1971-1972, Epstein joined the Xerox Webster Research Center becoming Principal Scientist. In 1985 he became Professor of Physics and Professor of Chemistry at The Ohio State University, and was appointed Distinguished University Professor in 1997 He presently is the Director of the OSU Institute for Magnetic and Electronic Polymers. Epstein has been Visiting Scientist at UCLA, Université Paris Sud, and the Technion.

Epsteins extensive research includes discovery of phenomena that result from organic molecules as the repeat units in magnets. New concepts developed in his labs include fractal magnetism, magnets with multiple photonic responses, and fully spin polarized room temperature magnetic semiconductors. Epstein also has extensively investigated the metal to insulator transition and charge motion in organic systems. In addition to his more than 600 papers he has been awarded over 30 patents.

Prof. Epstein is Fellow of the APS (1981) and of the American Association for the Advancement of Science (2002), and recipient of the William Fowler Award of the Ohio Section of the APS for Distinguished Work in Physics (2003). He serves the scientific community as Editor-in-Chief of the journal Synthetic Metals and a Guest Editor for the MRS Bulletin and has been an organizer of over 25 conferences and workshops.