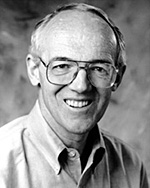 
"For more than twenty-five years of major and continuing contributions to the science and technology of molecular beam epitaxy, and for the growth of heterogeneous compound semiconductor structures that have furthered both device applications and physical understanding of low dimensional structures."

His research involves the growth of artificially structured materials by molecular beam epitaxy. His special interests are molecular beam epitaxy, the growth of quantum wells and superlattices and their applications to high performance electrical and optical devices and the physics of low-dimensional structures. He grew the first alternate monolayer artificial superlattices in semiconductors and the first modulation doped quantum wells.

He was co-discoverer of the quantum confined Stark effect and the fractional quantization of the Hall effect. He is a fellow of the American Physical Society, a member of the National Academy of Engineering, and was co-recipient (with Horst Stormer and Daniel Tsui) of the 1983 Oliver Buckley Condensed Matter Physics prize of the American Physical Society.