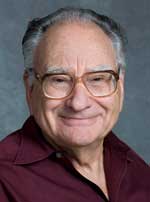 
"In recognition of his pioneering role in the experimental studies of flow in Relativistic Heavy Ion Collisions."


Arthur Poskanzer is Distinguished Senior Scientist Emeritus with the Lawrence Berkeley National Laboratory (Berkeley Lab). Poskanzer, a current member of Berkeley Labs Nuclear Science Division (NSD), is a pioneer in the field of relativistic nuclear collisions and a co-discoverer of collective flow, the phenomenon in which nuclear matter, compressed to a state of high temperature and density, exhibits a fluidic motion.

Poskanzer earned his undergraduate degree in physics and chemistry from Harvard, his masters degree in chemistry at Columbia University, and his Ph.D. in physical chemistry from MIT. After working 9 years as a chemist at Brookhaven National Laboratory, he joined the Berkeley Lab staff in 1966.

In addition to his co-discovery of collective flow of nuclear matter, Poskanzer was the first scientific director of the Bevalac accelerator, one of the leading organizers behind SPS heavy ion program at CERN, and the co-founder of the STAR collaboration at the Relativistic Heavy Ion Collider (RHIC). He was also a co-discoverer of elliptic flow at RHIC, which has proved to be major experimental evidence for the existence of the quark-gluon plasma, an ephemeral state of matter believed to have existed in the first few microseconds after the universe was born. He continues today as a member of the STAR collaboration working on methods of data analysis for elliptic flow.

Poskanzer is a Fellow of the American Physical Society and of the American Association for the Advancement of Science. He has won numerous awards and recognitions throughout his career, including the American Chemical Society Award in Nuclear Chemistry and the U.S. Senior Scientist Alexander von Humboldt Award.