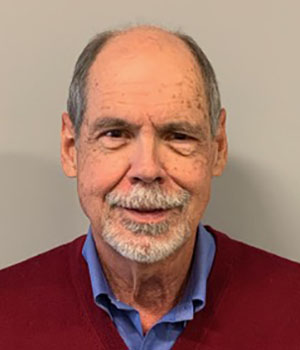 
"For leadership and technical ingenuity in achieving a measurement of the muon anomalous magnetic moment with a precision suitable to probe Standard Model mediated loop diagrams and possible manifestations of new physics, which inspired a vibrant synergy between experimental and theoretical particle physics to determine a comparably precise Standard Model prediction and interpret the implications of a possible discrepancy."


Bradley Lee Roberts received his B.S. in Physics from the University of Virginia in 1968 and Ph.D. in 1974 from the College of William and Mary under the supervision of R.E. Welsh and M. Eckhause. He was a Postdoctoral Research Associate at the Rutherford High Energy Laboratory in the U.K. with C.J. Batty and then at the MIT Laboratory for Nuclear Science with J.L. Matthews. In fall of 1977 he joined the physics faculty at Boston University. His research initially focused on the negative sigma hyperon magnetic moment and hyperon weak radiative decays at the Brookhaven National Laboratory AGS, for which he was recognized as an APS fellow. He then joined the CPLEAR experiment at CERN. In 1984 he joined the proposal for a BNL muon g-2 experiment, E821, and became Co-Spokesperson in 1989. spending a number of years commuting to BNL each week while the muon storage ring was being designed and constructed. He led the team that developed direct muon injection into the storage ring, an essential improvement over pion injection used at CERN. This technique significantly reduced the injection flash while increasing the number of stored muons/fill by >300, thereby enabling E821 to reduce the uncertainty on the muon magnetic anomaly from ±7,300 ppb at CERN to ±540 ppb. In 2009 Roberts and D.W. Hertzog co-founded the Fermilab g-2 experiment, E989, with the goal of ±140 ppb. The first result from E989 was reported in April 2021, confirming the E821 result.