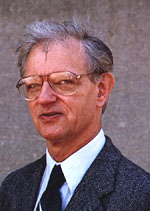 
"For their ground-breaking and penetrating work on classical statistical mechanics, integrable models and conformal field theories."


Dr. McCoy received his BS at Cal Tech in 1963 and his PhD from Harvard University in 1967. He joined the Institute for Theoretical Physics at the State University of New York at Stony Brook in 1967 where he is currently a Distinguished Professor of Physics. He has been visiting professor at the Research Institute of Mathematical Sciences in Kyoto, the Institute Henri Poincare and the Australian National University.

Dr. McCoy was awarded the Heineman prize for work done from 1967-1981 on the statistical mechanics of the Ising model including boundary critical phenomena, randomly layered systems which have Griffiths-McCoy singularities, the Painleve representation of the two point function, quadratic difference equations for the n-point functions, and the Ising model in a magnetic field. Dr. McCoy has in addition made contributions to the study of quantum spin chains, and the Fermionic representations of conformal field theory, and has been a co-discoverer of the integrable chiral Potts model. He has also worked extensively in quantum field theory and more recently has become known for his mathematical work in nonlinear differential equations and the theory of Rogers-Ramanujan identities.