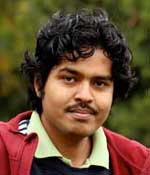 
"Turbulence and internal waves in tidal flow over topography."


Bishakhdatta Gayen received a degree in Bachelor of Mechanical Engineering from Jadavpur University in Kolkata, India in 2006, and a M.S. degree in Engineering Science, majoring in Fluid Mechanics, from the Jawaharlal Nehru Centre for Advanced Scientific Research, Bangalore, in 2007. He was then awarded University of California Graduate Fellowship and received an M.S. (2010) and Ph.D. (2012) from University of California, San Diego. He pursued research work on “Turbulence and Internal Waves in Tidal Flow over Topography” under the guidance of Prof. Sutanu Sarkar. The thesis research was funded by ONR and NSF. Bishakh is currently a Postdoctoral Fellow working with Prof. Ross Griffiths at the Australian National University in Canberra. His current research interests are nonlinear internal waves in the ocean, turbulent convection, modeling of Antarctic ice melting and Southern ocean dynamics.