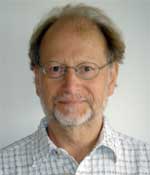 
After graduating from Oxford in 1964, Bryan Webber joined the Alvarez research group at Berkeley, working on neutral kaon decays at the Bevatron and completing his Ph.D. in experimental particle physics in 1969.  He then switched to theoretical physics and began working on strong interactions as a postdoc at LBL.  In 1971 he moved to Cambridge, where he headed the theoretical high- energy physics group at the Cavendish Laboratory from 1973 until his retirement in 2010.  His main research interest has remained strong interactions, first phenomenological models and then quantum chromodynamics.  He enjoys working closely with experimentalists and has made many contributions at the interface between theory and experiment, including the Herwig event generator, new jet-finding algorithms, event shape variables and models for non-perturbative QCD.  He continues this kind of work, seeking a more precise description of complex final states at the LHC, as Emeritus Professor of Theoretical Physics at Cambridge.  He was elected Fellow of the Institute of Physics in 1987 and Fellow of the Royal Society in 2001, and was awarded the Dirac Medal of the Institute of Physics in 2008.  He is currently a Leverhulme Emeritus Fellow, Visiting Professor at New York University and the 2012 Schrödinger Visiting Professor at the Pauli Center in Zurich.