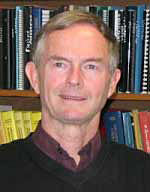 
"For a sustained record of novel experimental developments and new insights into interactions of ion and photon beams with atoms and molecules."


C.L. (Lew) Cocke received his B.A. degree from Haverford College in 1962 and his Ph.D. degree in nuclear physics from Caltech in 1967. After two years as a research associate at the Centre de Recherches Nucléaires in Strasbourg, France he moved to atomic physics and joined the physics faculty at Kansas State University where he is presently holds the rank of University Distinguished Professor and is the Director of the J.R.Macdonald Laboratory. He has had sabbatical stays at the University of Aarhus, the University of Frankfurt, Lawrence Berkeley National Laboratory and the University of Stockholm. His atomic physics work has been in the areas of energetic ion-atom collisions, especially involving highly-charged ions, recoil ion production, momentum imaging, and the interaction of synchrotron radiation and short intense laser pulses with atoms and light molecules. He received an Alexander von Humboldt award for study at the Universities of Frankfurt and Giessen in 1991-2. He has received the Conoco Distinguished Graduate Faculty award (KSU 1993), Olin K. Petefish Award (KU 2004), Max-Planck Research Award (1991) and an honorary doctorate from the University of Frankfurt (2005). He is a fellow of the American Physical Society and a member of the AAAS and the ACS.