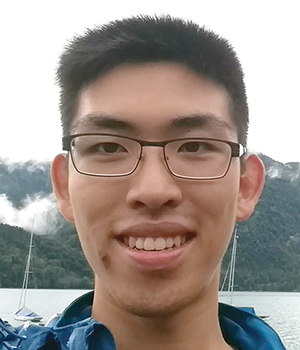 
"for development and experimental implementation of astronomical random number generators for loophole-free tests of Bell’s inequality and other applications in quantum fundamentals, astrophysics, and tests of general relativity."


Calvin Leung graduated with high distinction and departmental honors from Harvey Mudd College in 2017 with majors in physics and mathematics. His undergraduate thesis, supervised by Jason Gallicchio, was on developing an astronomical instrument which uses photons from quasars to generate random bits. Because these bits are determined by events occurring billions of years ago, they are guaranteed to be causally independent of terrestrial events, and thus can improve tests of quantum nonlocality. The high time resolution of this instrument also makes it capable of performing precise astrophysical tests of general relativity. This work has led to a publication in Physical Review Letters, a poster at the 2016 Sigma Pi Sigma Quadrennial Physics Conference which won the Optical Society of America’s Best Poster Award, and two additional publications, one in review and another in preparation. Calvin is currently continuing his research at the Institute for Quantum Optics and Quantum Information-Vienna while pursuing other investigations in quantum optics. In Fall 2018, he will begin his Ph.D. in physics at the Massachusetts Institute of Technology with an National Defense Science and Engineering Graduate Fellowship. Calvin is a member of the American Physical Society and the Society for Industrial and Applied Mathematics. He is a recipient of the 2016 Astronaut Scholarship, the Louise and Graydon Bell Prize, the Mindlin Prize, and the Alfred B. Focke Award. He enjoys teaching and tutored freshman and sophomore physics classes for three years at Mudd. In his spare time he likes to cook and play the cello.