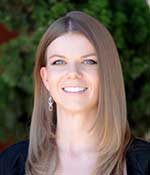 
"For development of a novel means to generate a differentially rotating unmagnetized plasma using magnetic and electric fields applied at the plasma edge, providing access to previously inaccessible laboratory plasma regimes, and for unique measurements of the plasma viscosity."


Cami Collins received her B.S. in physics and applied mathematics from Montana State University Bozeman in 2007. As an undergraduate, she participated in the National Undergraduate Fellowship Program in Plasma Physics and Fusion Energy Sciences at General Atomics. In 2013, she completed her Ph.D. in plasma physics at the University of Wisconsin, Madison, advised by Professor Cary Forest. At Wisconsin, Collins created a large, fast flowing, magnetic field free plasma using multicusp confinement and edge applied torque which can be used to study several outstanding problems in astrophysics, including the magnetorotational instability and the dynamo. As a graduate student, she was awarded the U.S. DOE Fusion Energy Sciences Graduate Fellowship and was selected to attend the 60th Annual Meeting of Nobel Laureates in Lindau, Germany. She is currently a postdoctoral researcher at the DIII-D tokamak at General Atomics, where her work focuses on Alfvén eigenmode induced transport of fast-ions.