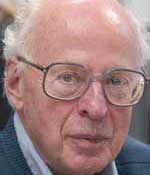 
"For dedication to the spirit of hands-on experimental instruction in Physics, inspirational teaching in the Advanced Undergraduate Laboratory of the University of Michigan, and continued contributions to physics laboratory instruction in the United States."


Carl W. Akerlof is a professor of physics at the University of Michigan – Ann Arbor. He obtained a BS degree in physics at Yale University in 1960 followed by work in experimental elementary particle physics leading to a PhD at Cornell University in 1967. Moving to the University of Michigan in 1966, he pursued research in particle physics with experiments at Argonne National Laboratory, Fermilab, Serpukhov and SLAC. In 1986, his interests shifted to astrophysics and the detection of cosmic sources of energetic gamma‐rays. Joining the Whipple Collaboration in Tucson, Arizona, this effort was rewarded by the discovery of TeV photons from Active Galactic Nuclei. In 1993, he began searching for prompt optical radiation from gamma‐ray bursts that was rewarded by a brilliant display from GRB990123. With this breakthrough, he constructed ROTSE‐III, an array of four robotic telescopes located in Australia, Texas, Namibia and Turkey that operated for more than a decade, observing optical emission from GRBs while discovering a number of supernovae in nightly mapping of the sky. Akerlof has taught the Advanced Undergraduate Lab class at Michigan since 2008. He is a member of the American Astronomical Society and a Fellow of the American Physical Society.