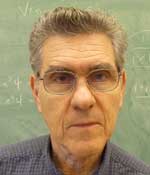 
"For developing the theory of PT symmetry in quantum systems and sustained seminal contributions that have generated profound and creative new mathematics, impacted broad areas of experimental physics, and inspired generations of mathematical physicists."


Carl M. Bender, Ph.D., is the Konneker Professor of Physics at Washington University in St. Louis (Mo.). He received his undergraduate degree in physics in 1964 from Cornell University (Ithaca, N.Y.) and his A.M. and Ph.D. from Harvard University (Cambridge, Mass.) in 1965 and 1969, respectively. Dr. Bender was a postdoctoral fellow at the Institute for Advanced Study in Princeton, New Jersey, from 1969 to 1970. He was an assistant professor from 1970 to 1973, and an associate professor from 1973 until 1977 at the Massachusetts Institute of Technology (Cambridge). Currently, Dr. Bender is an international professor of physics at Heidelberg University (Germany) and a visiting professor at King`s College London (U.K.), and is a member of the Higgs Centre at the University of Edinburgh (U.K.). He is the recipient of numerous awards and fellowships, including a Sloan Foundation Fellowship, a Burlington Northern Foundation Faculty Achievement Award, a Fulbright Fellowship, a Lady Davis Fellowship, a John Simon Guggenheim Memorial Foundation Fellowship, an Los Alamos National Laboratory Ulam Fellowship, a Compton Faculty Achievement Award, a Rockefeller Foundation Grant to visit the Bellagio Center in Italy, and a Leverhulme Foundation Fellowship. Dr. Bender has served on the editorial boards of many journals, including as the editor-in-chief of the U.K. Journal of Physics A. He has published over 330 papers and is the coauthor with Steven A. Orszag, Ph.D. of the textbook, "Advanced Mathematical Methods for Scientists and Engineers” (originally published by McGraw-Hill, currently published by Springer). The text is used in advanced classes at many universities. Dr. Bender`s interest is in developing techniques such as asymptotics, perturbation theory, semiclassical methods, differential equations, complex variable theory, numerical methods, and combinatorics, for solving difficult mathematical problems arising in theoretical physics. Among his research achievements is the demonstration that singularities in the coupling-constant plane (Bender-Wu singularities) explaining the divergence of perturbation theory, and the creation of the fields of large-order behavior of perturbation theory and PT-symmetric quantum theory. Dr. Bender is a fellow of the American Physical Society.