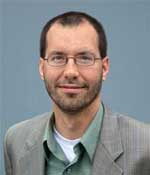 
Dr. Carl B. Schroeder received undergraduate degrees in Mathematics and Physics with High Honors in 1994 from the University of Maryland, College Park.  He received a DOE Fusion Science Fellowship and did his graduate work at the University of California, Berkeley, where he completed his Ph.D. in Physics in 1999.  Dr. Schroeder was a UCLA postdoctoral fellow, and his postdoctoral research focused on the development of an x-ray free-electron laser at SLAC.  Dr. Schroeder joined the Lawrence Berkeley National Laboratory in 2001 and is currently a Staff Scientist in the Accelerator & Fusion Research Division.  His chief research interests are the physics of intense laser-plasma interactions, plasma-based accelerators, and novel radiation sources.  This has led to investigations in the areas of nonlinear plasma wave excitation, short-pulse laser-plasma instabilities, particle trapping, and radiation generation from beam-plasma interactions.  Dr. Schroeder received the Lawrence Berkeley National Laboratory Outstanding Performance Award in 2005 and in 2007.  He is a member of the American Physical Society.