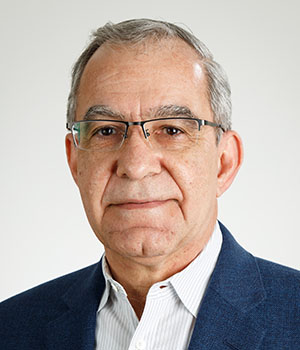 
"For outstanding and impactful seminal research in different areas of physics and, in parallel, for being a dedicated advocate for advancement in physics in Latin America and in the Hispanic Community in the USA."


Carlos R. Ordóñez got his B.S. in physics with honors at the University of Panama in 1979 and his Ph.D. in physics at the University of Texas in 1986. He has taught and done research at the University of Texas at Austin; The Rockefeller University; New York University; Vanderbilt University; The Institute for Advanced Study at Princeton; The Kavli Institute for Theoretical Physics at the University of Santa Barbara; the University of Houston and has had short-term visits to many other institutions in the US, Europe and Latin America. He has been a World Laboratory Fellow, a Simon Guggenheim Fellow and is a Fellow of the American Physical Society, and is a founding member of the National Society of Hispanic Physicists. He received the John Wheatley Award by the American Physical Society in 2009. He directed a Pan-American World Laboratory Center at the University of Houston from 1998-2006 and is the current director of the University of Houston-ICTP (International Center for Theoretical Physics, Trieste) program. He does research in high-energy theory with emphasis on quantum field theory and aspects of quantum gravity and black hole thermodynamics, mainly from the perspective of conformal quantum mechanics. He has made important contributions to theoretical nuclear physics (chiral lagrangian approach). During the last decade, he has studied the impact of quantum scaling anomalies in lower-dimensional ultracold Fermi gases and is currently doing research on the intersection of black hole physics, quantum optics and quantum information.