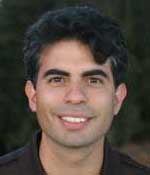 
Carlos Paz-Soldan received his B.Sc.E. in Engineering Physics in 2007 from Queen’s University in Kingston, Ontario, where he was awarded a Queen’s University Chancellor’s Scholarship and a Canada Millennium Foundation National Scholarship. During his undergraduate career he held summer research positions in neutrino physics, superconductivity, and plasma physics, the latter of which he chose to pursue in graduate school.

Carlos completed his Ph.D. in Physics in 2012 at the University of Wisconsin-Madison, with his dissertation detailing the effects of rotating conductors on MHD stability in a linear plasma column. At Wisconsin he was advised by Dr. Cary Forest with theory support from Dr. Chris Hegna. During his graduate work he also received a M.Sc. in Nuclear Engineering and Engineering Physics, and was awarded graduate fellowships from the American Nuclear Society and the Canadian National Science and Engineering Research Council.

After graduation Carlos joined the DIII-D Program at General Atomics as an ORISE post-doctoral fellow. His present work is centered on the effects and control of non-axisymmetric fields in tokamak discharges. He is a member of the American Physical Society.