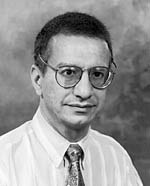 
"For their pioneering experiments in Plasma Based Accelerator Concepts; particularly for their unambiguous experimental demonstration that electrons can be accelerated to relativistic energies by the beating of two laser beams in a plasma with their frequency difference equal to the plasma frequency."


Dr. Joshi received his B.S. degree in Nuclear Engineering from London University in 1974 and his Ph.D. in Applied Physics in 1978 from Hull University, England. He held a postdoctoral position at the National Research Council in Ottawa, Canada for two years. Since 1980, he has been with the Electrical Engineering Department at UCLA; first as a member of the research staff and since 1988 as a full Professor. He is currently the Director of the Center for High Frequency Electronics at UCLA. Prof. Joshi has made many fundamental contributions to our understanding of extremely nonlinear optical effects in plasmas. Most notable including his first experimental demonstration of four-wave mixing, stimulated raman forward instability, resonant self-focusing, frequency upshifting by ionization fronts and nonlinear coupling between electron-plasma waves. Prof. Joshi is a Fellow of the American Physical Society and of the IEEE.