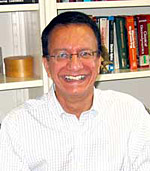 
"For his insight and leadership in applying plasma concepts to high energy electron and positron acceleration, and for his creative exploration of related aspects of plasma physics."


Chandrashekhar Joshi is a Distinguished Professor of Electrical Engineering at UCLA. He is also the Director of Center for High Frequency Electronics and heads the Neptune Laboratory for Advanced Accelerator Research at UCLA. He received his B.Sc. (1974) from London University and Ph.D. (1978) from Hull University, both in the U.K. Following a two year stint as a research associate at the National Research Council of Canada, where he worked on laser-plasma interactions, he jointed UCLA first as a researcher and since 1988 as a faculty member. At UCLA, Professor Joshi has built a strong research group that has done pioneering work in the areas of laser-plasma instabilities, plasma-based light sources, laser-fusion and basic plasma experiments. His group is best known, however, for developing the field of plasma based particle accelerators over the past two decades. Professor Joshi is a Fellow of the APS, IEEE and Institute of Physics (U.K). He is also the recipient of DPPs Excellence in Plasma Physics Award (1996)and USPAS prize for Achievement in Accelerator Physics and Technology(1997).