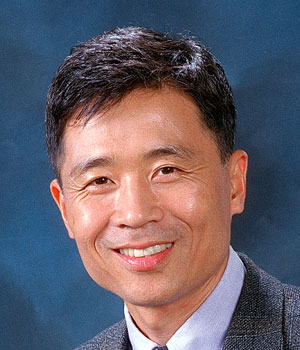 
"For pioneering research and insightful lectures demonstrating how the use of epitaxy can be used to manipulate the structure of materials to greatly enhance their properties and enable oxide electronics."

Chang-Beom Eom is the Raymond R. Holton Chair Professor in Engineering and the Theodore H. Geballe Professor in the Department of Materials Science and Engineering and Physics at the University of Wisconsin-Madison. He received his Ph.D. in Materials Science and Engineering from Stanford University in 1991. He then spent two years at AT&T Bell Laboratories in Murray Hill, New Jersey as a postdoctoral member of the technical staff, before joining Duke University in 1993 as an associate professor. He joined the University of Wisconsin-Madison in 2000 as part of a cluster hire in nanophase inorganic materials. His research focuses on epitaxial thin film heterostructures of complex oxides and nitrides, including ferroelectrics, piezoelectrics, multiferroics, superconductors, two-dimensional electron gases at oxide interfaces, and antiperovskites, with an emphasis on understanding fundamental solid-state phenomena and developing novel device applications. He received the National Science Foundation Young Investigator Award in 1994, the David & Lucile Packard Fellowship in 1995 and the 2007 Ho-Am Prize in Engineering. He is a fellow of The American Association for the Advancement of Science (AAAS), the American Physical Society (APS) and of the Materials Research Society (MRS). He served on the MRS Board of Directors and is currently an Associate Editor of APL Materials.