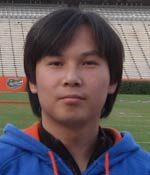 
Chao Cao was born and grew up in Hongzhou, China. He earned his Bachelors degree in Physics at Fudan University, Shanghai China, in 2003, when he entered the University of Florida for graduate study in the Department of Physics. He worked with Professor Hai-Ping Cheng of the Department of Physics and the Quantum Theory Project. Under her supervision, Chao worked on mechanical, electronic, and transport properties of quasi-one dimensional wires and on effects of external fields and environments. Chao developed a parallel computing framework for execution of multiple codes that allows multi-scale and multi- phenomena modeling and simulation. Chao has mastered a number of theoretical and computational methods and also worked on nano-magnets and high Tc materials during his Ph.D studies.

Chao received his Ph.D in Physics in 2008. He is continuing his work in computational physics in the areas of nano-scale sciences, condensed matter, and materials.