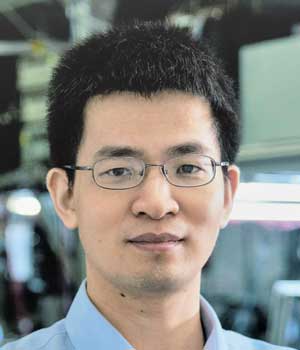 Chao-Yang Lu
University of Science and Technology of China


Chao-Yang Lu was born in 1982 in Zhejiang, China. He obtained a Bachelor's degree from the University of Science and Technology of China (USTC) in 2004, and PhD in Physics from the Cavendish Laboratory, the University of Cambridge in 2011.

His work on quantum teleportation was selected as by Physics World as “Breakthrough of the Year 2015”. His work on single-photon sources and optical quantum computing was selected by the Optical Society of American (OSA) as one of “Optics in 2016”, “Optics in 2017”, and “Optics in 2019”. He has been awarded as Fellow of Churchill College (2011), Hong Kong Qiu Shi Outstanding Young Scholars (2014), National Science Fund for Distinguished Young Scholars (2015), Nature’s top ten “science star of China” (2016), OSA Fellow (2017), Fresnel Prize from the European Physical Society (2017), AAAS Newcomb Cleveland Prize (2018), Huangkun Prize from Chinese Physical Society (2019), Nishina Asian Award (2019), Xplorer Prize (2019), IUPAP-ICO Young Scientist Prize in Optics (2019), and OSA Adolph Lomb Medal (2020). He is the Chair of Quantum 2020 and has served as an editorial board member in international journals such as Quantum Science and Technology, PhotoniX, Advanced Quantum Technology, Science Bulletin, and iScience.