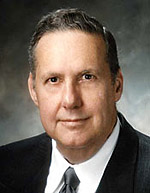 
Dr. Charles B. Duke is Vice President and Senior Research Fellow in the Xerox Innovation Group. Prior to holding this position, he was Deputy Director and Chief Scientist of the Pacific Northwest Division of the Battelle Memorial Institute and Affiliate Professor of Physics at the University of Washington. From 1972 to 1988 he held various technical and management positions at the Xerox Research Laboratories in Webster, NY and was an Adjunct Professor of Physics at the University of Rochester. During 1969-1972, he was a Professor of Physics and member of the Materials Research Laboratory and Coordinated Science Laboratory at the University of Illinois in Urbana, IL, following six years as a staff member of the General Electric Corporate Research and Development Center in Schenectady, NY. He received his Ph.D. in physics from Princeton University in 1963 following a B.S. Summa cum Laude with distinction in mathematics from Duke University in 1959. He is a Fellow and an Honorary Member of the American Vacuum Society, a Fellow of the American Physical Society, a Fellow of the IEEE, a member of the Materials Research Society and a life member of Sigma Xi. In 1977, Dr. Duke received the Medard W. Welch Award in Vacuum Science and Technology. He served as president of the American Vacuum Society in 1979, on its Board of Directors for seven years, and as a Trustee during 2003-2005. In 1981 he was named one of the ISI 1000 internationally most cited scientists. During 1985-1986 he served as founding editor-in-chief of the Journal of Materials Research and from 1992-2001 he was editor-in-chief of Surface Science and Surface Science Letters. He served on the council of the Materials Research Society for seven years, serving as Treasurer during 1991-2. In 1993 he was elected to the National Academy of Engineering and in 2001 to the National Academy of Sciences. During 1995-1999 he served on the Council and Executive Board of the American Physical Society. From 1997-2000 he served as general chairman of the Physical Electronics Conference. He served on the Governing Board of the American Institute of Physics for eleven years and on its Corporate Associates Advisory Committee for nearly twenty. He currently is the chair of a National Research Council study of Network Science. He has written over 370 papers on surface science, materials research, semiconductor physics, and the electronic structure of molecular solids, several patents on the use of feedback in the design of digital imaging and printing systems, a monograph on electron tunneling in solids, and has edited three books: Surface Science: The First Thirty Years (1994), Color Systems Integration (1998), and Frontiers in Surface and Interface Science (2002).