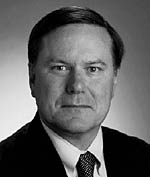 
"For his fundamental contributions to the basic plasma physics of collisionless shocks, magnetic reconnection and quasilinear theory, and to plasma astrophysics - including the Van Allen radiation belt and the Crab Nebula."


Dr. Kennel received an A.B. from Harvard College in 1959, and a Ph.D. in Astrophysical Sciences from Princeton University in 1964. Hw has been a tenured member of the UCLA Department of Physics since 1967, and was its Chairman in 1983 - 1986. He became a member of UCLA's Institute of Geophysics and Planetary Physics in 1971, and was Associate Director of UCLA's Institute for Plasma Physics and Fusion Research from 1991 - 1994. He is author or co-author of over 225 experimental and theoretical publications in plasma physics, space plasma physics, planetary science, astrophysics, and nonlinear science.

Kennel has been a Fulbright and a Guggenheim scholar, and a Fairchild Professor at the California Institute of Technology. He is a fellow of the American Geophysical Union, the American Physical Society, and the American Association for the Advancement of Science, and a member of the International Academy for Astronautics and the U.S. National Academy of Sciences. He won the Aurelio Peccei Medal from the Accademia Lincci, Rome, and the NASA Distinguished Service Medal.

Dr. Kennel served as Associate Administrator of NASA, for Mission to Planet Earth from 1993 to 1996, and in 1996, assumed his position as Executive Vice Chancellor at UCLA.