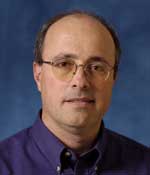 
"For his innovative use of experimental data and turbulence theory in the development of advanced models for large-eddy simulations, and for the application of these models to environmental, geophysical and engineering applications."


CHARLES MENEVEAU is the Louis M. Sardella Professor in the Department of Mechanical Engineering at Johns Hopkins University. He serves as the director of Johns Hopkins University’s Center of Environmental and Applied Fluid Mechanics (CEAFM) and as the deputy director of JHU’s Institute for Data Intensive Engineering and Science (IDIES). He received his B.S. degree in Mechanical Engineering from the Universidad Técnica Federico Santa María in Valparaíso, Chile, in 1985 and a Ph.D. degree from Yale University in 1989. During 1989/90 he was a postdoctoral fellow at the Stanford University/NASA Ames' Center for Turbulence Research. His area of research is focused on understanding and modeling hydrodynamic turbulence, and complexity in fluid dynamics in general. Special emphasis is placed on the multi-scale aspects of turbulence, using appropriate tools such as subgrid-scale modeling, downscaling techniques, fractal geometry, wavelet analysis, databases, and applications to Large Eddy Simulations, environmental transport and wind energy. He is Deputy Editor of the Journal of Fluid Mechanics and the Editor-in-Chief of the Journal of turbulence. He is Fellow of APS and has received the 2011 J. Cole Award from AIAA, the Johns Hopkins University Alumni Association's Excellence in Teaching Award (2003), and the APS’ François N. Frenkiel Award for Fluid Mechanics (2001).