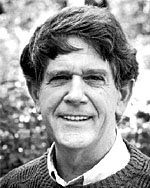 
"For his many important contributions to molecular spectroscopy, energy transfer, and reaction dynamics following his inventions and developments of fluorescence labeling and chemical timing spectroscopies."


Charles Parmenter completed his B.A. in Chemistry at the University of Pennsylvania in 1995. Following two years in the US Air Force with DuPont, he completed his Chemistry Ph.D in 1962 at the University of Rochester with W.A. Noyes, Jr. After postdoctoral research with G.B. Kistiakowsky at Harvard, he began his academic career at Indiana University in 1964. He is a Fellow of the American Physical Society and of the AAAS and is a member of the National Academy of Sciences.