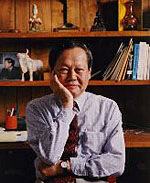 
"For fundamental contributions to statistical mechanics and the theory of quantum fluids, including: the circle theorem, off-diagonal long-range order and flux quantization, Bose-Einstein condensation, and one- and two-dimensional statistical mechanical models."


Dr. Yang is a native of China and became a U.S. citizen in 1964. He received his Ph.D. in 1948 from the University of Chicago. In 1949 he joined the Institute for Advanced Study in Princeton where he was a Professor from 1955 to 1966. In 1966 he joined the State University of of New York at Stony Brook where he is Albert Einstein Professor of Physics. He is also Director of the Institute of Theoretical Physics at SUNY- Stony Brook.

Dr. Yang is a member of the US National Academy of Science, the Academia Sinica, Taiwan and the American Philosophical Society. He also holds foreign membership in the Russian Academy of Sciences, the Royal Society (London), the Chineses Academy of Science, and several other academies. He received the Nobel Prize in 1957, the Rumford Premium (1980), the National Medal of Science (1986), the Benjamin Franklin Medal (1993), the Bower Prize (1994), and the N. Bogoliubov Prize (1996). He holds honorary Doctorate of Science degrees from Princeton University (1958) and a dozen other universites.