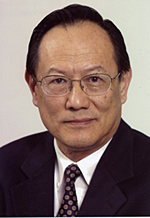 
"For his path-breaking research in magnetic nanostructures and for his outstanding mentoring and lecturing in materials physics."


Chien received his undergraduate degree in physics from Tunghai University in Taiwan in 1965, and his MS and Ph. D. in physics in 1968 and 1972, respectively, from Carnegie-Mellon University. He began as a post-doctoral fellow in physics at the Johns Hopkins University in 1973, and has risen through the ranks to be the Jacob L. Hain Professor in Physics. He is the director of the Material Research Science and Engineering Center at Hopkins. Chien's research is in experimental condensed matter physics, particularly the studies of structural, electronic, magnetic, and superconducting properties of nanostructured solids. He has published more than 300 journal articles and holds several patents. He is one of the 1120 most cited physicists according to the Institute for Scientific Information. Chien has been awarded honorary professorships at Nanjing, Lanzhou, and Fudan universities in China, and is a Fellow of the American Physical Society.