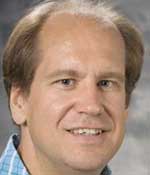 
Chris Hegna received his PhD from Columbia University in 1989 and BS from the University of Wisconsin-Madison in Applied Mathematics, Engineering and Physics in 1986. Following a one-year postdoctoral position working at the Princeton Plasma Physics Laboratory, he joined the University of Wisconsin-Madison where he is currently a Professor in the Department of Engineering Physics and serves as the Director of the Center for Plasma Theory and Computation. Prof. Hegna’s primary field is theoretical plasma physics with an emphasis on magnetic confinement. Current research interests includes the areas of nonideal and nonlinear MHD instabilities, kinetic theory modifications to fluid-like descriptions of plasmas, plasma dynamics in 3-D magnetic confinement systems and the role of magnetic geometry, symmetry and topology on plasma instabilities, turbulence and transport properties. Prof. Hegna has also worked at the National Institute for Fusion Studies in Japan and UKAEA Technologies at Culham Laboratories, Abingdon, England.

Prof. Hegna is fellow of the American Physical Society (2003) and has served on the Division of Plasma Physics Fellowship Committee, Press Committee and Program Committee. Additionally, he has served as the Chair of the Sherwood Fusion Theory Executive Committee, on the USBPO research committee and council, on the Theory Coordinating Committee and on various advisory committees and review panels.