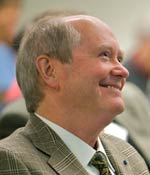 
" For their work, separately and collectively, to chart a course of the exploration of TeV scale physics using multi-TeV hadron colliders."


Chris Quigg graduated in physics from Yale in 1966 and received his Ph.D. at Berkeley in 1970 with J. D. Jackson. After four years at Stony Brook, he moved to Fermilab, which has been his scientific home ever since. He was for ten years Head of Fermilab's Theoretical Physics Department. In 1987 he returned to Berkeley to serve for two years as Deputy Director of the Superconducting Super Collider Central Design Group. He has held many visiting appointments, including École Normale Supérieure (Paris) andCERN. Quigg's scientific interestsrange from hadron structure and quarkonium through electroweak symmetry breaking and ultrahigh-energy neutrino interactions. His current research focuses on experiments at the Large Hadron Collider. A new edition of his textbook, Gauge Theories of the Strong, Weak, and Electromagnetic Interactions, is forthcoming. Chris Quigg is a Fellow of the American Association for the Advancement of Science and of the American Physical Society and holdsan Alexander von Humboldt Award. Hewas Editor of the Annual Review of Nuclear and Particle Science (1994-2004). As Chair of the Division of Particles and Fields, he led the organization of Snowmass 2001: a Summer Study on the Future of Particle Physics.