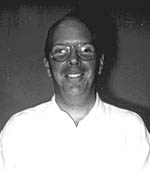 
"For their pioneering experiments in Plasma Based Accelerator Concepts; particularly for their unambiguous experimental demonstration that electrons can be accelerated to relativistic energies by the beating of two laser beams in a plasma with their frequency difference equal to the plasma frequency."


Dr. Clayton received his undergraduate degree in Nuclear Engineering from the University of Michigan in 1976 and his Ph.D. in Engineering from UCLA in 1984. He has designed and implemented the state-of-the-art Mars Laser Laboratory at UCLA. He was involved as one of the chief scientists on the experimental beatwave acceleration programs which uses the high power of Mars laser to accelerate electrons at unprecedented rates in the laboratory. He is currently the project manager for the Neptune Laboratory at UCLA which endeavors to produce a high quality 100 MeV electron beam from beatwave acceleration. He has contributed to the understanding of stimulated Brillouin scattering, collinear optical mixing, and most recently, to the wavebreaking of relativistic plasma waves excited by forward Raman scattering. Dr. Clayton is a Fellow of the American Physical Society and a Senior Member of the IEEE.