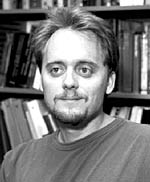 
"For his pioneering work advancing the understanding and predictive computer modeling of the interaction of short-pulse, high intensity laser light with plasma including the effects of Raman forward scattering, non-linear group velocity, relativistic self-focusing, and non-linear collisional absorption at ultra-high intensity."


Christopher Decker received his Bachelors degree (Magna Cum Laude) in physics from the University of California at San Diego in 1987. He received his Masters degree in physics from the University of California at Los Angeles in 1989 during which time he worked under Francis Chen on helicon wave plasma sources. He received his Ph.D. in plasma physics from UCLA in 1994 where his advisor was Dr. Warren B. Mori. He has held several teaching and research positions in the Department of Physics at UCLA and worked the summer of 1992 at the Advanced Computing Laboratory at Los Alamos National Laboratory. His honors include Caledonian Society for academic achievement at UCSD in 1987 and the Physical Sciences Dean's Fellowship at UCLA in 1988. Currently he is working at Lawrence Livermore National Laboratory (X-Division) on developing novel X-ray sources, X-ray diagnostics for the inertial confinement fusion program and application of short-pulse high-intensity lasers.