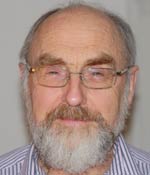 
"For fundamental contributions to the understanding of nuclear matter at very high densities, the structure of neutron stars, their cooling, and the related neutrino processes and astrophysical phenomena."


Christopher Pethick received his B. A. degree in 1962 and his D. Phil degree in 1965, both from the University of Oxford.  After postdoctoral positions at Magdalen College, Oxford and the University of Illinois, he joined the Illinois faculty in 1970.  In 1973 he became professor at NORDITA, and for many years following that he divided his time between NORDITA and the University of Illinois. He was director of NORDITA from 1989 to 1994.  He has contributed to the theory of diverse physical systems, including the helium liquids and superconductors, ultracold atomic gases, and dense matter in neutron stars and supernovae.   He was a co-recipient of the 2008 Lars Onsager Prize for his work on quantum liquids.