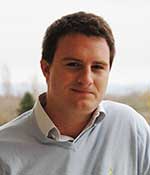 
"Searches for New Symmetries in proton-proton collisions with the Razor Kinematic Variables."


Christopher Rogan is Junior Fellow in Harvard's Society of Fellows and a particle physicist working on the ATLAS experiment at the CERN Large Hadron Collider in Geneva, Switzerland. He began collaborating on experiments at CERN as an undergraduate at Princeton University, working on the Compact Muon Solenoid (CMS) experiment. After graduating from Princeton in 2006, Christopher continued on CMS as a graduate student with Caltech, working on topics including the calibration and operation of the CMS calorimeters, jet and missing momentum reconstruction and measurements of the spin and quantum numbers of the Higgs boson. As a graduate student he was named as one of Forbes Magazine's top 30 under 30 innovators in science and technology. Christopher received his PhD in 2013, with his dissertation focusing on searches for supersymmetry in final states with leptons, jets and missing transverse momentum. Currently, Dr. Rogan's research focuses on developing and implementing new techniques for searching for evidence of Dark Matter at ATLAS, in the hope that we can shed light on this elusive phenomena.