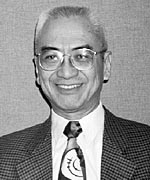 
"For advancing the understanding of the microscopic behavior of ionized gases through his innovative and pioneering studies of excitation in electron and ion collisions with atomic and molecular targets."


Chun C. Lin received his B.S. degree from the University of California-Berkeley in 1951 and Ph.D. from Harvard University in 1955. His thesis advisor was J.H. Van Vleck. Lin was on the faculty at the University of Oklahoma during 1955 to 1968. In 1968 he moved to the University of Wisconsin-Madison where he is now the John and Abigail Van Vleck Professor of Physics.

Lin began his career in the field of microwave spectroscopy. While at the University of Oklahoma he initiated a program on electron excitation of atoms in collaboration with Robert M. St. John. Much of his research in this field is directed toward understanding the basic nature of the atomic and molecular processes in ionized gases. For many years, Lin also worked on the theory of the electronic structure of crystals and impurity atoms in solids. Lin served as the Chairman of the Gaseous Electronics Conference in 1990 - 1992 and the Chair of the Division of Atomic, Molecular, and Optical Physics (DAMOP) of the American Physical Society in 1994 - 1995.