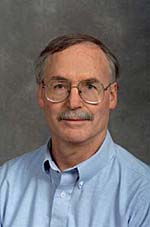 
"For their critical leadership in conceiving and developing the electron cyclotron resonance (ECR) ion source and advanced ECR source, which have opened a new era in heavy ion studies of nuclear phenomena."


Dr. Claude Lyneis received his B.S. in Physics from the University of Washington in 1965 and his Ph.D. in Physics from Stanford University working with Prof. Alan Schwettman in 1974. After a year as a visiting scientist at the Kernforschungszentrum in Karlsruhe, Germany, he returned to the High Energy Physics Laboratory at Stanford to work on the Superconducting Accelerator (SCA). There he worked in accelerator physics, developed techniques to localize thermal magnetic breakdown in superconducting cavities, identified the mechanism for one point multipacting and studied beam breakup in the SCA.

In 1981 he moved to the Nuclear Science Division at Lawrence Berkeley National Laboratory to become Director of Operations and Development at the 88-Inch Cyclotron. In addition to overseeing the operation of this national facility, he also leads the development of Electron Cyclotron Resonance (ECR) ion sources for use with heavy-ion accelerators. The Berkeley group developed ovens, specialized wall coatings and other innovations, which have contributed to the international effort to advance the performance of ECR sources for the production of highly charged ions. The Advanced ECR ion source which was developed initially for the cyclotron has been adopted by heavy-ion accelerators at Argonne National Laboratory, Michigan State University and Jyvaskyla. Dr. Lyneis is currently working on a next generation superconducting ECR source for the 88-Inch Cyclotron. This source may also have application in the proposed Rare Isotope Accelerator.

Dr. Lyneis is currently a Senior Staff Physicist and Head of the 88-Inch Cyclotron. He is a fellow of the APS, serves on the editorial board of the Review of Scientific Instruments and was a member of the ISOL Task Force for NSAC in 1999.