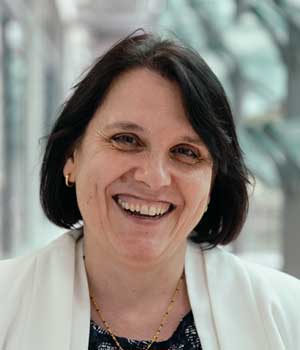 
"For the theoretical prediction, design and realization of non-magnetic and magnetic topological semi-metals and new types of topological insulators."


Claudia Felser studied chemistry and physics at the University of Cologne, completing her diploma in solid state chemistry in 1989 and her doctorate in physical chemistry in 1994. After postdoctoral fellowships at the Max Planck Institute in Stuttgart, and the CNRS in Nantes, France, she joined the University of Mainz in 1996, becoming a full professor there in 2003. She currently directs the Max Planck Institute for Chemical Physics of Solids in Dresden (Germany). Her research foci are the design and discovery of novel inorganic compounds, in particular, Heusler compounds for multiple applications and new topological quantum materials. Felser was honored in 2011 as a Distinguished Lecturer of the Institute of Electrical and Electronics Engineers Magnetics Society, and in 2017 she received a European Research Council advance grant. She was awarded the 2010 Nakamura Lecture Award from University of California, Santa Barbara, the 2014 Alexander M. Cruickshank Lecturer Award of the Gordon Research Conference, and received a SUR-grant Award from IBM. In 2014 she also received the Tsungmin Tu Research Prize from the Ministry of Science and Technology of Taiwan, the highest academic honor granted to foreign researchers there. She is a fellow of the American Physical Society, the Institute of Physics in London, and since 2018, is a member of the Leopoldina, part of the German National Academy of Sciences.