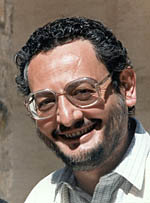 
"For his pioneering work in the analysis of instabilities in electron storage rings, and his seminal and comprehensive development of the theory of free electron lasers."


Claudio Pellegrini received the "Laurea" in 1958 and the "Libera Docenza" in 1965 from the University of Rome. In 1958-1978 he was at the Frascati National Laboratory. In 1978 he joined Brookhaven, where he was Associate Chairman of the Light Source and Co-chairman of the Center for Accelerator Physics. He moved to UCLA in 1989, as a Professor of Physics. He had many visiting appointments and has been a Fulbright Fellow in 1997. He is a Fellow of APS, and has been Chair of the APS Division of Physics of Beams. He has been awarded the International Free-electron Laser (FEL) Prize in 1999.

He has published more than 200 papers, has been the editor of several books, and is a co-author of a textbook on Analytic Mechanics. His work on electron-positron colliders led to the discovery and explanations of a new collective instability in electron beams, the Head-Tail Effect, which can strongly limit the beam intensity and the collider luminosity. His later studies of FELs in the high gain regime as a collective instability, have given a new insight into FELs, and have led to the development of IV Generation Light Sources.