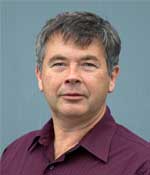 
Dr. Csaba Tóthis a Staff Scientist, and Deputy Head for Operations of the 'Lasers, Optical Accelerator Systems Integrated Studies' (LOASIS) Program at theLawrence Berkeley National Laboratory (LBNL), Berkeley, California.  He received his undergraduate degree in Physics (1983), and his Ph.D. in Physics and Quantumelectronics (1987), from the Eötvös University, Budapest, Hungary.  At the beginning of his career in the Research Institute for Solid-State Physics, Budapest, Dr. Tóth studied multiphoton interactions, optical tunneling, and higher-order optical harmonic generation at surfaces and in plasmas.  Since 1992 he continued his research in the USA (Rice University, Houston, TX, then UCSD in San Diego, CA) involving high peak-power, ultrashort laser pulses of pico-, femto-, and attoseconds.  In 2000 he joined LBNL, where his interest includes laser plasma accelerators (LPAs) and new LPA-based light sources from THz to X-ray radiation.  Since 2009 he is also involved in the BELLA Project - the development of a 1 PW, 1 Hz LPA driver.  Dr. Csaba Tóth is a member of the American Physical Society (APS), the Optical Society of America (OSA), and the Eötvös Physical Society of Hungary.  His honors and awards include the George Soros Fellowship for Young Scientists (1990), the Janossy Award of the Central Research Institute for Physics, Budapest (1990), and the Outstanding Performance Award of LBNL, Berkeley (2005, 2007).