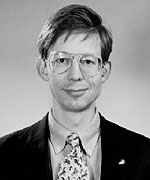 
"For his contributions in applying advanced mathematical theory of Taylor series of several complex variables to determine the domain of convergence for dynamical systems and for his contribution in advancing and determining an optimal symplectification scheme for the Taylor map applicable particularly to long term tracking in accelerator physics."


Dan Abell earned his BA in physics at Swarthmore College in 1982. He then taught physics and math at the Dublin School, a small prep school in New Hampshire, before going on to pursue graduate work. He received an M.Sc. from the University of Maryland in 1989 for experimental work in surface physics, and then switched to theoretical work in dynamical systems and accelerator theory. Working under the guidance of Prof. Alex Dragt, Dan earned his Ph.D., also from the University of Maryland, in 1995. Their research centered on two particular topics: (i) the relationship between the domain of convergence of a given Taylor series map and the singularities of the motion in the underlying dynamical system; and (ii) optimal schemes for symplectifying a given Taylor series map for the purposes of doing long-term tracking studies in accelerator physics. Dan is continuing the research on Cremona symplectification, the latter topic---now with particular emphasis on applications to the Large Hadron Collider.