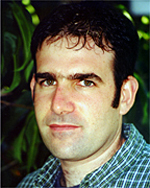 
"Peeking and poking at a new quantum fluid: Studies of gaseous Bose-Einstein condensates in magnetic and optical traps.
"


Dan. Stamper-Kurn (nee Kurn) was born in Rehovoth, Israel and raised in Israel, New York, and California. He pursued his undergraduate studies at the University of California, Berkeley as a National Merit and Citizens' Foundation Scholar. During these years, Dan spent a summer interning at SLAC, and later worked with Prof. P. B. Price at Berkeley on studies of cosmic rays. He wrote an undergraduate thesis on measuring the isotopic abundance of ultra-heavy cosmic rays, and graduated from Berkeley with highest honors, receiving a BA in physics in 1992. Dan then explored a career in environmental science as a research assistant in the Energy and Environment Division of the Lawrence Berkeley Laboratory, studying the effects of urban climatology on energy use. In 1994, Dr. Stamper-Kurn began graduate studies at MIT, intending to become a condensed-matter theorist, but eventually finding his way to experimental atomic physics under Prof. Wolfgang Ketterle. He was fortunate to begin studying alkali-gas Bose-Einstein condensates just as they were first being observed. For his doctoral work, he led studies of dynamic processes and sound propagation, the demonstration of an optical trap for Bose-Einstein condensates, experiments on spinor Bose-Einstein condensates, and studies of light scattering. His work was supported by a NSF and JSEP Graduate Fellowship, and in 1998, he received the New Focus Student Award. Since the completion of his Ph.D. in October 1999, he has been developing cavity QED experiments with single trapped neutral atoms as a Millikan Postdoctoral Fellow with Prof. H. Jeff Kimble at Caltech. In 2001, Dr. Stamper-Kurn will return to UC Berkeley as an assistant professor.