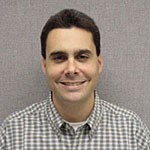 
"For his innovative experimental development and measurement of the p(17F,p)17F elastic scattering reaction at the Oak Ridge Holifield Radioactive Ion Beam Facility in order to find the key low-energy s-wave resonance for the 17F(p,gamma)18Ne reaction. His measurements of the properties of this resonance greatly reduce the uncertainties in the 17F(p,gamma)18Ne rate, which is crucial to an understanding of nucleosynthesis and gamma-ray production in novae as well as in the break-out to the rp-process in X-ray bursts."


Dr. Bardayan graduated from Tennessee Technological University in May, 1993 with a B.S. in physics and a minor in mathematics. He attended graduate school at Yale University, with Peter Parker as his thesis advisor. After working on experiments at the A.W. Wright Nuclear Structure Laboratory at Yale University, he joined Michael Smith and Jeffrey Blackmon in the Nuclear Astrophysics Group at the Holifield Radioactive Ion Beam Facility (HRIBF) at Oak Ridge National Laboratory. At the HRIBF, he participated in the installation of the Daresbury Recoil Separator and developed the Silicon Detector Array, which enabled kinematically-complete measurements of reaction cross sections to be made with radioactive beams of mixed elements. His thesis experiment measured the elastic scattering rate of radioactive 17F nuclei from a hydrogen target and, in doing so, discovered the key low-energy resonance for the 17F(p,)18NE stellar reaction rate. After receiving his Ph.D. from Yale in 1999, he continued his stay at the HRIBF as a postdoctoral associate working for Art Champagne at the University of North Carolina at Chapel Hill. His current research focuses on the use of radioactive ion beams to measure reaction cross sections of importance to understanding nucleosynthesis yields in stellar explosions such as novae and x-ray bursts.