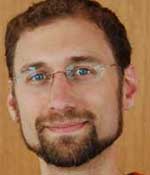 
"For innovative contributions to neutrino physics, particularly the broad and substantial role he played in commissioning, calibration and analysis in the Daya Bay measurement of the mixing angle theta-13."


Dan Dwyer's research explores the key roles of weakly-interacting particles in our universe. He earned a B.S. in physics at MIT in 2000 and received the Orloff Award for his work on modeling baryon-number violation via decay of electroweak skyrmions. He completed his Ph.D. at the UC-Berkeley in 2007, supported by a NSF Graduate Research Fellowship. His thesis focused on the precision measurement of reactor antineutrinos with the KamLAND experiment, which provided the most distinct evidence in support of the oscillation of massive neutrinos. As a postdoctoral scholar at Caltech he led the commissioning and data analysis efforts of the Daya Bay experiment, which discovered the short-distance oscillation of reactor antineutrinos due to the mixing angle θ13. For this work he was honored with the 2012 Sambamurti Memorial Lectureship at Brookhaven National Laboratory. In 2012 he joined Lawrence Berkeley National Laboratory as a project scientist, coordinating the measurement of both the amplitude and frequency of the Daya Bay reactor antineutrino oscillation. He is now exploring future directions in weak-interaction physics: searching for the existence of sterile neutrinos using intense radioactive sources, probing the neutrino mass hierarchy with reactor and atmospheric neutrinos, and exploring whether weakly-interacting massive particles can explain the dark matter content of the universe. He is a member of the APS divisions of particles and fields and nuclear physics.