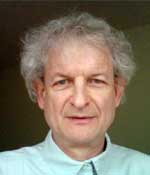 
"For seminal work on the classification and characterization of two-dimensional unitary conformal field theories of critical states."


Daniel Friedan received his PhD in physics in 1980 from the University of California at Berkeley. He worked at the Centre dEtudes Nucléaires de Saclay during 1980-81. In 1981, he joined the Physics Department and the Enrico Fermi and James Franck Institutes of the University of Chicago. The work cited by the APS was done there in collaboration with Zongan Qiu and Stephen Shenker. Since 1989, Dr. Friedan has been at Rutgers the State University of New Jersey, in the Department of Physics and Astronomy and the New High Energy Theory Center. He has been working on two speculative projects: the possibility of a mechanism that could produce quantum field theory at observable distance scales in spacetime, and the possibility of making asymptotically large quantum computers from near critical quantum circuits belonging to universality classes described by 2d quantum field theories.