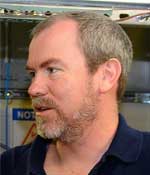 
"For his striking observations of flow in a quantum fluid, including detection of counter-flow that confirmed the two-fluid picture of quantum fluid, observation and characterization of reconnections of quantized vortices, and the discovery of an inverse-cube tail in the velocity distribution of superfluid turbulence."