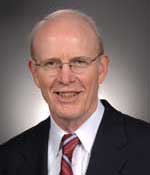 
"For the invention and development of electron spin sources and detectors, and their application to measurement science."


Daniel Pierce is a NIST Fellow, Emeritus currently working to extend the measurement capabilities of Scanning Electron Microscopy with Polarization Analysis (SEMPA), a high resolution magnetic imaging technique that has been especially useful in studying magnetic thin films and exchange coupling of magnetic multilayers. Dan received a B.S. in Physics from Stanford University in 1962, an M.A. in Physics from Wesleyan University (CT), and a Ph.D  in Applied Physics from Stanford in 1970. After college, he taught physics with the Peace Corps in Nepal.  He worked with H-C. Siegmann on early spin-polarized photoemission studies at the ETH-Zurich, where together with F. Meier they discovered spin-polarized photoemission  from  GaAs. This formed the basis for the spin-polarized electron gun developed by Dan and coworkers when he joined the National Institute of Standards and Technology (then National Bureau of Standards) in 1975. The polarized electron gun was applied to studies of surface magnetism and aided the invention (with R. Celotta and J. Unguris) of a low energy, fist-sized spin-polarization analyzer ideal for SEMPA.  Dan has received two R&D 100 awards, the NIST  E. U. Condon and William P. Schlichter awards, Silver and Gold Medals from the Department of Commerce, and the AVS Gaede-Langmuir Prize.  He is a Fellow of the APS and AVS.