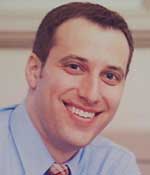 
"Exploring the Structure of Hadrons Through Spin Asymmetries in Hard Scattering Processes."


Daniel attended Lebanon Valley College (Annville, PA) on a Vickroy Scholarship and received his Bachelor's degree in May 2008 as a double major in Physics and Mathematics. During his time as an undergraduate, he won the College's Academic Achievement Award in Physics, Max F. Lehman Memorial Mathematics Award, and John Walter Outstanding Scholar-Athlete Award. Daniel then attended graduate school at Temple University (Philadelphia, PA) on a University Fellowship and received his Ph.D. in Theoretical Physics in May 2013. During that time, he was awarded the University's Peter Havas Scholarship for Outstanding Physics Graduate Students. He was also selected to attend the Lindau Nobel Laureates Meeting in Germany, a prestigious event in which Nobel Laureates give lectures and engage in informal discussions with young scientists. Daniel's work focuses on understanding the spin structure of hadrons (e.g., protons and neutrons), with his main research centering on spin asymmetries in hard scattering processes. He recently co-authored several papers that have made significant progress towards explaining the phenomenon of transverse single-spin asymmetries in proton-proton collisions, which has been an unresolved issue for close to 40 years. This research has also led to the first ever phenomenological indication on the process dependence of the so-called Sivers function, a characteristic that was predicted over a decade ago but lacks experimental proof. Daniel currently is a post-doctoral fellow at the RIKEN BNL Research Center at Brookhaven National Lab (Upton, NY).