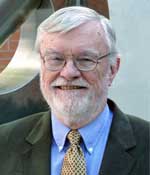 
"For his outstanding and fundamental work on how nuclear reactions shape multi-dimensional and partly out-of-equilibrium evolution of stars and supernova explosions and their yields of new isotopes."