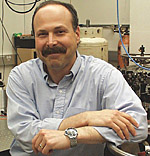 
Professor David D. Awschalom received his B.Sc. in physics from the University of Illinois at Urbana-Champaign, and his Ph.D. in experimental physics from Cornell University. He was a Research Staff member and Manager of the Nonequilibrium Physics Department at the IBM Watson Research Center in Yorktown Heights, New York. In 1991 he joined the University of California-Santa Barbara as a Professor of Physics, and in 2001 was additionally appointed as a Professor of Electrical and Computer Engineering. He is presently Director of the Center for Spintronics and Quantum Computation, and Associate Director of the California Nanosystems Institute.

His group has research activities in optical and magnetic interactions in semiconductor quantum structures, spin dynamics and coherence in condensed matter systems, macroscopic quantum phenomena in nanometer-scale magnets, and implementations of quantum information processing in the solid state. He has developed a variety of femtosecond-resolved spatiotemporal spectroscopies and micromagnetic sensing techniques aimed at exploring charge and spin motion in the quantum domain. Professor Awschalom received an IBM Outstanding Innovation Award (1987), the MRS Outstanding Investigator Prize (1992), and the International Union of Pure and Applied Physics Magnetism Prize (2003) for outstanding achievements in the magnetism of quantum electron systems. Dr. Awschalom is a member of the AAAS, the MRS, and is a Fellow of the APS.