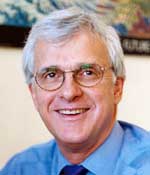 
"For pioneering new approaches to the study of complex systems, using the complementary approaches of nonlinear dynamics and statisical physics, and for communicating the excitement of this new field to diverse audiences."


A theoretical physicist/applied mathematician, Dr. Campbell received his B.A. in Chemistry and Physics from Harvard University (1966) and Ph.D. from Cambridge University in Theoretical Physics and Applied Mathematics (1970). He held post-doctoral positions at UIUC (1970-72) and the Institute for Advanced Study in Princeton (1972-74). He joined Los Alamos National Laboratory (1974) as the first Oppenheimer Fellow, co-founding and later directing the Center for Nonlinear Studies. In 1992 he became Professor in and Head of the Department of Physics at UIUC, moving in 2000 to Boston University, where he is currently University Provost and Professor, Electrical Engineering and Physics. Campbell is known for his studies of localized nonlinear excitationssolitons, polarons, bipolarons, breathers, intrinsic localized modesin many branches of physics particularly in conducting polymers, magnetic systems, and related novel solid state systems. An international leader in the field of nonlinear science, Campbell has held visiting professorial positions in France, Germany, Russia, Hong Kong, China, and Japan. Founding Editor-in-Chief of the AIP journal Chaos:An Interdisciplinary Journal of Nonlinear Science and a Fellow of the APS and of the AAAS, he currently serves as Co-Chair of the Science Board of the Santa Fe Institute.