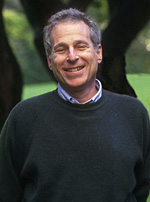 
"For the creation of widely used analytical methods and simulation techniques in statistical mechanics, with applications to theories of liquids, chemical kinetics, quantum processes, and reaction paths in complex systems."

Chandler's primary area of research is statistical mechanics. His most significant contributions include the development of the Weeks-Chandler-Andersen theory, generally regarded as the basic equilibrium theory of the liquid state, and the Pratt-Chandler theory of hydrophobic effects. Chandler has also created many of the basic techniques with which condensed matter chemical equilibrium and chemical dynamics are understood with molecular theory. His most recent works focus on dynamics and structure far from equilibrium, including processes of self assembly and also the glass transition.